Why does birth seem so easy to our animal friends when it is so difficult for us? One obvious difference is the altered shape of the pelvis and birth outlet that is caused by our upright stance; our babies need to twist and turn to navigate these unique bends. Even our nearest cousins, the great apes, have a near-straight birth canal.

However, in every other way, human birth is like that of other mammals — those animals that suckle their young — and involves the same hormones: the body’s chemical messengers. These hormones, which originate in the deepest and oldest parts of our brain, cause the physical processes of labour and birth, as well as exerting a powerful influence on our emotions and behaviour.

Researchers such as French surgeon and natural birth pioneer Michel Odent believe that if we can be more respectful of our mammalian roots, and the hormones that we share, we can have more chance of a straightforward birth ourselves.

Labour and birth involve peak levels of the hormones oxytocin, sometimes called the hormone of love, and prolactin – the mothering hormone. These two hormones are perhaps best known for their role in breastfeeding. As well as these, beta-endorphin, the body’s natural pain-killer, and the fight-or-flight hormones adrenaline and noradrenaline (epinephrine and norepinephrine) play an important part in the birth process. There are many more hormonal influences on birth that are not well understood.

All mammals seek a safe place to give birth. This “nesting” instinct may be due to an increase in levels of prolactin, which is sometimes referred to as the nesting hormone. At this stage, as you may have observed with your cat, interference which the nest — or more importantly with the feeling of safety — will stall the beginning of labour.

Even after labour has started, there are certain conditions that will slow, or even stop the process. If the fight-or-flight hormones are activated by feelings of fear or danger, contractions will slow down. Our mammalian bodies are designed to give birth in the wilds, where it is an advantage to postpone labour when there is danger, and to seek safety. 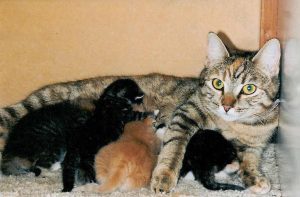 Many women have had the experience of their labour stopping when they entered the unfamiliar surroundings of a hospital, and some women can be as sensitive as a cat to the presence of an observer. Giving birth away from our natural environment can cause the sorts of difficulties for humans that captive animals experience when giving birth in a zoo.

Michel Odent cautions that even hunger, which also causes the body to release fight-or-flight hormones, can stop labour from progressing. He advises women to eat – if they are hungry – in the earliest stages of labour; many hospitals, though, have a policy that prevents labouring women from eating once they are admitted.

Oxytocin is the hormone that causes the uterus to contract during labour. Levels of oxytocin gradually increase throughout labour, and are highest around the time of birth, when it contributes to the euphoria and receptiveness to her baby that a mother usually feels after an unmedicated birth. This peak, which is triggered by sensations of stretching of the birth canal as the baby is born, does not occur when an epidural is in place. Administration of an epidural has been found to interfere with bonding between ewes and their newborn lambs.

Synthetic oxytocin is often given by drip – that is, directly into the bloodstream – when labour contractions are inefficient. Oxytocin given in this way does not enter the brain, and so does not contribute to the post-birth “high”, and in fact can lead to desensitisation to the mothers own oxytocin production. Nipple stimulation is sometimes used to stimulate contractions because, like breastfeeding, this causes oxytocin levels to increase.

Oxytocin has another crucial role to play after the birth. Oxytocin causes the contractions that lead to separation of the placenta from the uterus, and its release as the “after-birth”. When oxytocin levels are high, strong contractions occur that reduce the chance of bleeding, or post-partum haemorrhage.

Putting your newborn baby to your breast is the easiest way to increase oxytocin levels, but Michel Odent also emphasises the importance of privacy during the hour following birth. This gives the opportunity for uninterrupted skin-to-skin and eye-to-eye contact between mother and baby – conditions that optimise oxytocin release.

Oxytocin helps us in our emotional, as well as our physical, transition to motherhood. From the first weeks of pregnancy, oxytocin helps us to be more emotionally open and more receptive to social contact and support. As the hormone of orgasm, labour and breastfeeding, oxytocin encourages us to “forget ourselves”, either through altruism — service to others — or through feelings of love.

The fight or flight hormones – also called catecholamines (pronounced cat-e-kol-a-meens), or CAs- can interfere with oxytocin release during labour and after the birth. However they do have an important role to play in the second stage of labour, which is when birth actually occurs.

Early in second stage, when the cervix is fully open but the urge to push is not yet strong, a woman can feel the need to rest for some time. This is sometimes known as the “rest and be thankful” time. After this, she may quite suddenly experience the dry mouth, dilated pupils and sudden burst of energy that are all characteristic of high levels of CAs.

This burst of CA’s gives a mother the energy to push her baby out, and Michel Odent observes that, when unmedicated, women usually want to be upright at this time. Some traditional cultures have used this fight-or-flight effect to help women having difficulty with the delivery by surprising or shouting out at this stage. It makes sense, at this point-of-no-return, for fear or danger to speed up the birth, so that a mother can gather up her newborn baby and run for safety.

CA levels drop quickly after the birth, which can make a mother may feel cold or shaky. At this stage a very warm atmosphere is essential, according to Michel Odent, to keep CA levels low and to allow oxytocin to work effectively to prevent bleeding.

Prolactin, another childbearing hormone, is most noteworthy for its effects after the birth. Prolactin is the major hormone of breast milk synthesis. Suckling by the newborn baby increases prolactin levels; early and frequent suckling from the first days makes the breast more responsive to prolactin, which in turn helps to ensure a good long-term supply of milk.

Like the other hormones, prolactin has effects on emotion and behaviour. Prolactin helps us to put our babies needs first in all situations by increasing submissiveness, anxiety and vigilance.

When prolactin is combined with oxytocin, as it is soon after birth and during breastfeeding, it encourages a relaxed and selfless devotion to the baby that contributes to a mother’s satisfaction and her baby’s physical and emotional health.

Beta endorphin (pronounced beet-a en-door-fin) is one of the endorphins that are released by the brain in times of stress or pain, and is a natural equivalent to painkilling drugs like pethidine.

During labour, beta-endorphin helps to relieve pain, and contributes to the “on another planet” feeling that women experience when they labour without drugs. Levels of beta-endorphin are reduced when drugs are used for pain relief.

Beta-endorphin also switches on learning and memory, perhaps explaining why we remember our labour and birth in such amazing detail. Like oxytocin, endorphin hormones can induce euphoria and are also released during lovemaking and breastfeeding. In fact endorphins are actually present in breast milk, which explains the natural high that babies can get after a breast-feed. Beta-endorphin helps the body to release prolactin, underlining the elaborate interplay between these hormones of labour, birth and breastfeeding.

Happy Healthy Child- the Ultimate Childbirth Course! Parenting is changing-- have you noticed? The old paradigms from our parents' generation are transforming. Our new values, built around love and … END_OF_DOCUMENT_TOKEN_TO_BE_REPLACED