Synthetic oxytocin is widely used in maternity care around the world. It is commonly administered to women to induce or to speed up (augment) labour, and to prevent or treat bleeding after birth (postpartum haemorrhage).

Like all maternity-care interventions, synthetic oxytocin may be beneficial, even life-saving, for mothers and babies in some situations. However, because of its widespread use, including in many healthy mothers and babies, it is important to understand the possible risks and side-effects.

This two-part blog explores some important questions, including:

In Part 2: (coming in Nov-Dec 2022, following publication of a review in this area): make sure to sign up to my newsletter)

Much of this information comes from a new publication on Maternal oxytocin levels during physiological childbirth, which Sarah is a co-author (more details below).

Is synthetic oxytocin harmless, because it mimics the natural oxytocin that women release during labour? 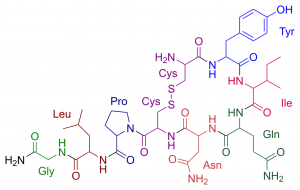 However, our own natural oxytocin is made in the brain and is released during labour into both the body, where pulses of oxytocin reach the uterus and cause the rhythmic contractions of labour, and also locally into the brain, where it has calming and pain-relieving effects.

As labour progresses, high oxytocin levels in the brain help to counter the stress and pain of the strengthening contractions, which are caused by high levels of oxytocin stimulating the labouring woman’s uterus. At the same time, oxytocin is activating her brain’s pleasure and reward centres in preparation for bonding with her newborn baby.

In contrast, synthetic oxytocin is administered intravenously (IV), and in constant, high doses rather than in lower-levels and pulses. This can lead to maternal oxytocin levels that are more than double those in a natural (physiological) labour. (See Oxytocin levels during physiological childbirth)

For these reasons, IV synthetic oxytocin causes contractions that are longer, stronger and closer together than the woman’s body would naturally produce, especially in early labour.

With this combination,  women will miss the natural stress-reducing benefits of their own oxytocin, which also has anti-inflammatory and anti-oxidant effects. (More about this below.) This combination might also explain some of the longer-term effects that have been found for synthetic oxytocin, as discussed in Part 2. 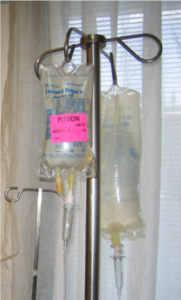 For the baby, the longer, stronger contractions will inevitably reduce blood and oxygen supply to some extent, increasing the risks of hypoxia (low oxygen), which is especially dangerous for the baby’s brain at this time. For this reason, women administered synthetic oxytocin in labour always require monitoring of the baby’s heart rate to check for indications of hypoxia.

Some studies suggest extra risks of hypoxia and its possible long-term consequences for babies exposed to synthetic oxytocin in labour, although this area is not well studied. (See studies below.)

Prolonged, high doses of synthetic oxytocin can disrupt the mother’s oxytocin system by reducing the number and function of oxytocin receptors in her uterus. This “receptor desensitisation” will reduce her uterine sensitivity to oxytocin, and decrease the effectiveness of oxytocin (natural or synthetic) to cause strong contractions, including after the birth. This explains why women who receive synthetic oxytocin in labour have a higher chance of postpartum haemorrhage and require extra medications to counter this risk.

It is sometimes presumed that administering synthetic oxytocin in labour will reduce the mother’s own oxytocin production. This is not true, according to our current understandings.

Oxytocin in labour is not controlled by the usual ‘negative feedback’ systems,  whereby high levels of a biological marker leads to feedback that reduces levels. For example, our blood pressure is controlled such that excessively high blood pressure is detected by our body systems, and leads to changes that bring it back down to what is normal for each of us. This negative feedback is operative in most biological systems, and contributes to homeostasis- the maintaining of physiological stability in the face of external changes.

However, labour is not a homeostatic process! In labour, contractions need to strengthen rather than remain stable, and eventually be strong enough to push the baby from the mother’s uterus. This strengthening requires positive, rather than negative, feedback systems, also called ‘feed-forward cycles.’ 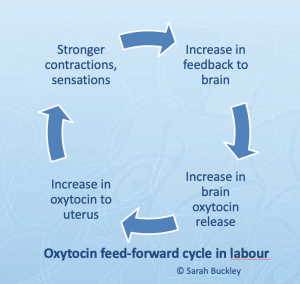 This diagram shows one feed-forward cycle in labour, where the sensations from strong uterine contractions cause feedback in the brain that releases oxytocin, causing even stronger contractions, more sensations and more oxytocin release.

This feed-forward cycle, also known as the Ferguson reflex, provides the high levels of oxytocin (3-4-fold increased at birth) that are needed for the birthing mother to have an effective pushing stage.(See Oxytocin levels during physiological childbirth)

The administration of synthetic oxytocin (without epidurals) will not reduce this cycle, or the labouring woman’s natural oxytocin release. In fact, as will be discussed in part 2, synthetic oxytocin may even accelerate this feed-forward cycle (and increase brain oxytocin) by causing stronger contractions with greater sensations.

However, when epidurals are co-administered, the sensations of contractions that fuel this feed-forward cycle are abolished, which slows or even stops the cycle, and consequently slows or stops oxytocin release, as described in this blog.

The combination of epidurals with high doses of synthetic oxytocin can therefore increase physiological stress in labour, but reduce oxytocin release in the labouring mother’s  brain, which would usually counteract this stress in labour. (This stress reflects the extra biological stresses in her uterus from the stronger contractions, and can occur even if the labouring woman does not feel the associated pain.)

In addition, we know that prolonged, high doses of synthetic oxytocin can disrupt the oxytocin system by reducing the labouring woman’s uterine oxytocin receptors,  as explained above.

Note that we do not think that receptor desensitisation occurs in the brain, because oxytocin (or synthetic oxytocin) does not cross into the brain through the ‘blood-brain barrier’ in significant amounts, as explained in our paper, Oxytocin levels during physiological childbirth.

Synthetic oxytocin is chemically identical to the natural oxytocin released by women in labour and birth. However it has different effects because it is administered IV and does not cross into the labouring woman’s brain.

While synthetic oxytocin does not directly reduce the mother’s own oxytocin release, the common co-intervention of epidural analgesia significantly reduces oxytocin release. This can slow labour and reduce oxytocin’s anti-stress, anti-inflammatory and anti-oxidant benefits. This combination might explain some of the longer-term effects that have been found for synthetic oxytocin, which will be discussed further in Part 2.

In addition,  prolonged, high doses of synthetic oxytocin increase the risk of bleeding after birth (postpartum haemorrhage). It has been suggested that this reflects disruption to uterine oxytocin receptors, making the uterus less responsive to oxytocin and increasing the risk of bleeding. However, other mechanisms may be involved.

Much of this information comes from a new publication on Maternal oxytocin levels during physiological childbirth: A systematic review with implications for uterine contractions and central actions of oxytocin  This was written with the good work and dedication of colleagues Kerstin Uvnas Moberg, Anette Ekstrom-Bergstrom, Sarah Buckley and other European co-authors. This work was partly funded by  EU COST IS1405 BIRTH: Building intrapartum research through health.

Impacts of synthetic oxytocin in labour:

Note that these studies are observational and do not imply causation. However, there is very little high-quality research available in this area.

Happy Healthy Child- the Ultimate Childbirth Course! Parenting is changing-- have you noticed? The old paradigms from our parents' generation are transforming. Our new values, built around love and … END_OF_DOCUMENT_TOKEN_TO_BE_REPLACED