What do you know about epidurals and their risk and benefits?  In this blog (Part 2), Dr Buckley explores the impacts of epidural on the hormones of labour and birth , and what this might mean for mothers and babies in the short and longer-terms. (You can read Part 1 here)

Like all interventions in labour and birth, epidurals have benefits and risks for mothers and babies. Part 1 explores how epidurals work; the role of stress in labour (its not all bad!); epidural side-effects, including impacts on oxytocin systems; and why epidurals usually slow labour.

In this Part 2, we will look in more depth at the hormones, and what research tells us about epidural impacts, including on the longer-term hormonal processes of breastfeeding and bonding.

These FAQs are intended to help you to balance the benefits and risks of epidurals for yourself and your own unique situation, so that you can make the choices that are right for you, your baby and your family.

How do epidurals impact oxytocin in labour?

As described in detail in Part 1, the sensations of labour provide feedback to the brain to increase oxytocin r 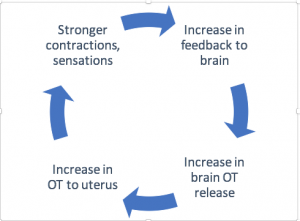 Labour progress usually slows or stops after epidural administration because of the lack of sensation and sensory feedback to the brain. This also reduces oxytocin release within the brain

Why is oxytocin doing in the labouring mother’s brain, anyway?

While oxytocin is most famous in childbirth for causing the contractions of labour, it has many other beneficial effects that depend on its release in the brain. Oxytocin has pain-relieving and stress-reducing effects that are welcome in labour. Oxytocin also activates brain pleasure and reward centres that contribute to post-birth euphoria.

Reward centre activation  happens for all mammals as mothers meet their newborns for the first time. This imprints pleasure in relation to infant contact, and ensures that mothers will be rewarded and motivated to give the dedicated care that all mammalian newborns require. This is why dog, cow, or elephant mamas will devotedly care for their babies (and butt or bite you if you try to interfere!) without ever going to a prenatal class or reading a book.

Natural birth pioneer Michel Odent calls this phase,”The beginning of a great love affair.” The oxytocin peaks in the brain from release during labour and birth, and heightened further by first contact, ensure that mother and baby will have the best first date ever! (See more in my Ecstatic Birth ebook here).

How does oxytocin help with breastfeeding?

Oxytocin is also the hormone that causes the let-down, or milk-ejection reflex during breastfeeding. Stimulation of the nursing mother’s nipple (or sometimes just the thought of her baby) causes a surge of oxytocin to be released from her brain into her body. This activates milk ducts that push milk to the suckling baby. In addition, nursing-related pulses of oxytocin stimulate the release of prolactin, which promotes milk production in the longer-term.

At the same time, oxytocin released into the mother’s brain reinforces pleasure and reward, so that she will enjoy contact with, and breastfeeding, her baby . The baby also receives oxytocin with suckling, with digesting, and through the milk, so that both will benefit from oxytocin’s relaxing, “calm and connection,” and “hormone of love” effects.

There are several ways that epidurals could affect breastfeeding. First, the numbing local anaesthetic and sedating opioid drugs used in epidurals all cross into the baby’s body. These drugs have been found in newborn urine even 1-3 days after birth. Opioid drugs such as fentanyl could affect the newborns ability to establish breastfeeding, as some studies have found.

The negative effects of epidurals on maternal oxytocin could also affect breastfeeding. Studies have found disruptions to oxytocin release during early breastfeeding among women exposed to epidurals, along with synthetic oxytocin, in labour. This could also reduce prolactin release, and disrupt future milk production.

Possible longer-term effects of epidurals on breastfeeding have not been studied in high-quality research. See below for more about supporting breastfeeding when an epidural is needed.

How does oxytocin help with bonding

As discussed above, oxytocin released into the mother’s brain during labor and birth activates maternal circuits that switch on instinctive mothering. Powerful activation of reward and pleasure centres at this time ensures that the mother finds her offspring pleasurable and rewarding.

In addition, human studies have found that new mothers experience changes in personality following physiologic birth, making them more relaxed and interactive, which also helps with enjoying her baby.

This area has not been well researched. Some studies have shown impacts such as more negative descriptions of the baby at one month among women exposed to labour epidurals, which might reflect disruption to the activation of reward systems. In addition, the usual postpartum personality changes described above are not seen in women who have had an epidural, which could also make the transition to motherhood more difficult.

Note that these studies do not imply that women who have had epidurals (or other interventions) will love their babies less, or be negatively impacted in their mothering. However, having an epidural may reduce the ‘head start’ that Mother Nature  provides through the peaks of oxytocin and other hormones in physiologic labour and birth. The resulting ‘hormonal gap’ may take some effort to fill.

What can we do to help mothers and babies to fill in these “hormonal gaps”?

In summary, epidurals can create a hormonal gap for the new mother (and the baby, directly or indirectly) in relation to oxytocin. This could impact the initiation of breastfeeding for mother and/or newborn, and potentially disrupt the pleasure and reward she experiences with her baby.

These hormonal gaps can be filled, but more effort will be needed outside of the biologically ‘sensitive period’ of labour and birth. For example hormone receptor numbers reach peak levels at physiologic labour onset, making hormonal systems maximally sensitive and most easily activated through to the early postpartum period.

Human studies show maximal oxytocin receptor numbers in the uterus, and animal studies (impossible to do on women) show maximal brain and mammary gland receptors for oxytocin and prolactin.

Filling in hormonal gaps means supporting activities that stimulate hormonal release for mother and baby. The most powerful of these are skin-to-skin contact and breastfeeding.

Practically, this would mean promoting early and ongoing skin to skin contact, with liberal opportunities for newborn-initiated breastfeeding, along with extra breastfeeding help if needed, eg lactation consultant support. These practices feature prominently in epidural studies that show good outcomes for breastfeeding.

Epidurals and breastfeeding review and study on fentanyl

Impacts of epidurals on breastfeeding hormones and personality changes

Epidural drugs in the newborn e.g. here and here

My whole-day Undisturbed Birth workshop on DVD  You can attend my acclaimed workshop in the comfort of your own home!

This DVD workshop is suitable for interested parents as well as birth professionals, with free  postage worldwide.

Happy Healthy Child- the Ultimate Childbirth Course! Parenting is changing-- have you noticed? The old paradigms from our parents' generation are transforming. Our new values, built around love and … END_OF_DOCUMENT_TOKEN_TO_BE_REPLACED